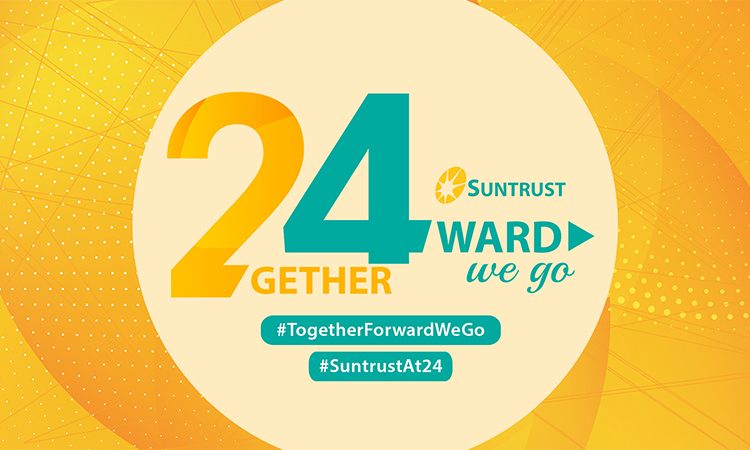 While the pandemic crisis brought several obstacles along the way, Suntrust Properties, Inc. (SPI) nonetheless moved forward and marked milestones as it expanded its affordable, quality homes in the country. Such progress, for Suntrust, is attributable to its value for togetherness in working and accomplishing a shared objective — a value that the company further highlighted in celebrating its 24th year.

With its anniversary theme “2gether, 4ward we go,” Suntrust recognizes the significance of unity among its people whose crucial role and synergy can push the company towards its growth and success.

“’2gether, 4ward we go’ is a call for employees and salespeople to work together towards a common goal and that is to turn more dreams into reality,” Suntrust President Atty. Harry Paltongan said in his speech during the company’s virtual anniversary program held on November 15.

“The theme serves as a reminder for the whole group to recognize the importance of our actions being correlated and coordinated with each other. Because the strength of the company relies not on our hard work alone but on our ability to work together and ensure that others are doing the same,” he expressed.

Prior to the main celebration, the people of Suntrust organized pre-anniversary activities.

A week before the celebration, the company set up the Anniversary Wall, its modern take of the traditional freedom wall where employees could share their hopes and dreams through love notes addressed to their future selves.

Also displayed was a Tapestry wall art for employees to reveal their source of strength amid the pandemic. The wall served as a way to answer the questions “What keeps the company together during the pandemic?” and “What do you look forward to next year?,” both of which employees responded with words that resonated with them the most.

Suntrust also conducted the Trees of Hope on its pre-anniversary celebration in Porac, Pampanga. Through Stateland, Inc., a Suntrust company, the tree-planting activity sowed 100 fruit-bearing seedlings inside The Arcadia. The initiative can help improve the air quality, mitigate stormwater, provide shade, and enhance the beauty of Suntrust’s flagship project.

Suntrust’s traditionally-held annual sportsfest TagiSuntrust was once again postponed due to the pandemic restrictions. Nonetheless, with the help of technology, the company continued instead its virtual version of TagiSuntrust, the E-Sports Edition. Games included Pictionary, word factory, and chess, among others, which employees played during lunch breaks last month. The awarding ceremony announced the winners for each game, who received medals, trophies, and cash prizes.

The company also staged its SPI Got Talent, a virtual talent video contest, to showcase the creative abilities of its employees.

During its anniversary celebration, Suntrust also opened its corporate wall. The company has a creed, an embodiment of its values and principles, which they recite and look to embrace wholeheartedly. For its anniversary, the company ensured that the creed was read by everyone.

The walls also presented Suntrust’s history to remind its people of the company’s humble beginnings and milestones since its inception in 1997. It encouraged the people to reflect on this journey as the company looks forward to its 25th anniversary next year.

Suntrust was formed amid the 1997 Asian financial crisis, and it thrived as one of today’s biggest real estate developers in the Philippines. Throughout its 24 years, the company has built more than 30 projects nationwide; and despite the ongoing health and economic crisis, it has made milestones with its properties.

This year, Suntrust has launched two residential properties, the Suntrust Ascentia condominium to rise in Sta. Ana, Manila and the new inventories for its Cybervilleproject in Cavite. Its model houses in The Arcadia, a 22.6-hectare residential community in Pampanga, were also blessed. It also held the topping-off ceremony of The Mist Residences, its condominium project in Baguio City. These milestones signified that despite the pandemic, the company was still moving in the right direction.

Suntrust commits to helping address the housing backlog by building affordable homes, andit assures its homebuyers that it listens and works harder to attend to their needs.