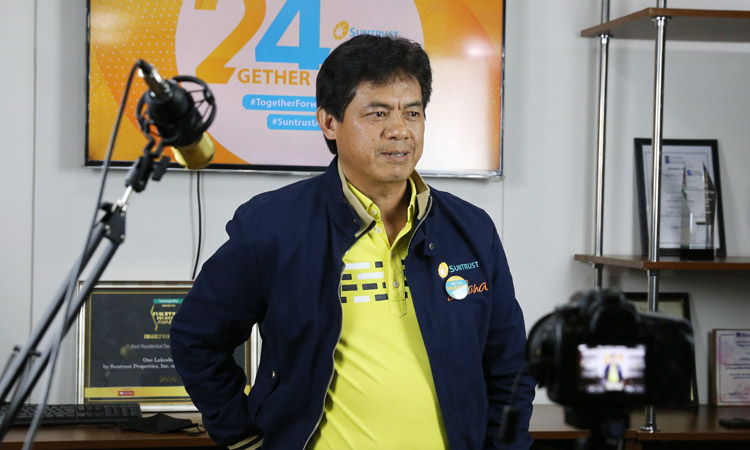 Suntrust Properties at 24: ‘2gether, 4ward we go’ for the country’s most trusted developer

In the world of real estate, trust is very difficult to earn. Without the trust of partners, suppliers, and, eventually, the customers, a real estate company is bound to face an uphill climb for growth, risking its survival and viability in the long term. It is for this reason that companies do all things possible to earn the trust of clients not just to seal a deal, but to keep them as “proof of success” for a lifetime.

If there’s a real estate company in the country that has nurtured this hard-earned trust from clients, and even has the word “trust” in its name, it is none other than Suntrust Properties. And why Suntrust? It is clear to see that amid the challenges of the world today, especially the unexpected global health pandemic, Suntrust continues to thrive and extend its reach nationwide on its 24th year.

“From being a rookie to being one of the most trusted developers in the country, we have been building affordable and quality homes, one city at a time. Our world-class projects, personalized client servicing, and on-time delivery has built our solid reputation,” said Atty. Harry Paltongan, president of Suntrust Properties. “As we mark our 24th anniversary this year, we will highlight the value of togetherness in working toward a common goal with the theme, ‘2gether, 4ward we go.’”

According to Paltongan, 24 years was filled with highs and lows, of victories and challenges. But through the years, the unity of its members allowed Suntrust to survive and thrive even better.

“There’s no doubt that the hard work of our workforce played a significant role in ensuring the success of the company, but it was the synergy of our people that allowed the company to grow and be strong,” he added.

The theme, Paltongan explained, serves as a reminder for the whole group to recognize the importance that each action has to be correlated and coordinated with one another. He believed that the strength of the company relies not on hard work alone but on the ability of people to work together and ensure that others are doing the same.
“2gether, 4ward we go – this is a call for employees and salespeople to work together toward a common goal and that is to turn more dreams into reality,” said Paltongan in a speech during the virtual anniversary program held last Nov. 15, 2021.

A meaningful celebration
A virtual thanksgiving mass, officiated by Rev. Fr. Gabriel Paraan, director of Cardinal Sin Welcome Home of the Archdiocese of Manila, started the anniversary celebration to thank God for all the blessings each stakeholder of Suntrust Properties had received in the past 24 years.

The virtual mass was followed by an E-Sports Virtual Awarding Ceremony and SPI Online Bingo.

As a tradition, the Suntrust family holds a sports fest every year, however, due to the restrictions, the Suntrust annual sports fest, or “TagiSuntrust,” was once again postponed. But through the help of technology, the group was able to continue its virtual version, which started last year through “TagiSuntrust – the E-Sports Edition,” bringing back everyone’s favorite game, Pictionary, along with word factory, chess, scrabble, games of the general, and riversi, all played virtually during lunch breaks in October. The winners for each game were announced during the E-Sports Awarding Ceremony where medals, trophies, and cash prizes were given.

The day also marked the launch of the company’s corporate wall. Other than the value of working together, the company released an embodiment of values and principles which it called its “creed.”

“At present, we have about 500 employees and close to 500 salespeople, so in 24 years, we have immensely progressed. That is the fruit of our working together. Other than working together, we have an embodiment of values and principles which we call our creed, which we keep on reciting. I hope we will learn to adapt, because those are the embodiment of what makes the company progress. During our 24th anniversary, we made sure that it was read by everyone,” explained Paltongan.

The history of the company is also displayed on the walls to remind everyone of the company’s humble beginnings and important milestones since its inception in 1997. As Suntrust looks forward to its 25th anniversary next year, it encourages its employees and salespeople to reflect on its journey through the years.

Fun games with prizes awaited the employees during the second part of the program. To showcase its talented and creative employees, the company also launched “SPI Got Talent,” a virtual talent video contest.

Eventful pre-anniversary activities
Prior to the actual anniversary day, Suntrust Properties already conducted a series of events leading to its 24th anniversary.

One of them was the unveiling of the “Anniversary Wall,” a modern version of the traditional freedom wall, which encouraged employees to be open about their dreams and hopes for the future by writing a love note addressed to their future self.

A hopeful tree-planting event
Before the main event, Suntrust Properties conducted a tree-planting activity called “Trees of Hope” in Porac, Pampanga. Through Stateland, Inc., a Suntrust company, 100 fruit-bearing seedlings were planted inside The Arcadia, Suntrust’s flagship project in Pampanga.

“The trees will create a more sustainable community for future homeowners. It will help improve the air quality, mitigate storm water, provide shade, and enhance the aesthetic beauty of the project,” said Paltongan.

The Suntrust management and employees were joined by sales Suntrustees of Pampanga.

Moving forward, stronger than ever
Looking back at its storied history, Suntrust has faced many challenges. In fact, the company was formed in the middle of the 1997 Asian Financial Crisis, and yet, it has thrived to be one of the biggest real estate developers in the country today.

With over 30 projects nationwide, Suntrust is 24 years strong despite the hurdles brought by the pandemic. The real estate industry remains resilient and hopeful. Suntrust even introduced and launched two new residential properties this year – Suntrust Ascentia, a new condominium project to rise in Sta. Ana, Manila, and the new inventories for Cyberville project in Cavite.

Paltongan is also proud to report that the company was able to celebrate milestones for some of its projects, including the blessing of its model houses in The Arcadia, a 22.6-hectare residential community in Porac, Pampanga, and the topping-off ceremony of The Mist Residences, a condominium project in Baguio City.

“All these milestones signify that the company is going in the right direction amid the various challenges,” said Paltongan. “Our aggressive marketing stance and attractive packages are meant to serve more people which will, in the process, increase our market share. We are committed to helping solve the housing backlog by providing affordably-priced homes for all market segments. We guarantee our homebuyers that we are listening to their needs and we will work harder to fulfill those needs and always earn their trust. To 24 years and beyond!”